Hunfrithi are an ancient race of elder giants, somewhat related to dwarves. Due to their long exile from the middle world they are pale skinned with blonde or red hair, though the rare sport in their population has brown hair. Eyes are almost always a dark steel grey or jade green. Both males and females are muscular and not unattractive (in a stocky, dwarvish way -- use dwarf reaction modifiers, -5 for normal Hunfrithi).

Hunfrithi are a peaceful race of farmers and artisans who were forced by circumstances to become warriors. In general they tend to be quiet while solitary or when working, but gregarious and jovial at play. Most are willing to give non-koththi strangers the benefit of the doubt, but if proven wrong they have learned to be swift, deadly and unrelenting.

Over 40,000 years ago these peaceful beings fought a losing war against the giant forces of Kototh in the Elder mountains, and remnants of their cities can still be found in remote valleys. In the final times a small band of survivors created a hiding place, a sanctuary, located beneath one of their plundered cities, the intent being to wait out the offensives and come back after they had been forgotten as exterminated. However, due to the efforts of a traitor in their numbers their refuge became a prison.

The sanctuary is a lower world pocket that takes the form of a 20 mile wide bowl valley with mountain walls 10 miles high. In the center is a rock spire that stretches up into the milky-white sky, holding aloft an ever-glowing light. It is forever an overcast noon in the sanctuary. Small rivers flow from cascades down the bowl walls to accumulate in a lake close to the spire, a lake that drains through cracks in the lake floor and never overflows. Thick forests cover most of the bowl not taken for homes and farms. The edges of the bowl have mines for iron and precious metal ores, and the Hunfrithi have reverted to their older passions of sculpture and carvings.

The entry to the sanctuary begins with a mile long tunnel down from the plundered city into the pocket that ends on a ledge 1 mile above the bowl floor. A 10' wide staircase winds its way to the bowl floor over 2 miles of mountain edge. There are no railings -- it is not a path for the agoraphobic.

In the past 400 years (their time -- outside time passed at 100 times that rate) the small enclosed world has had an effect on the population of the sanctuary (initially less than a thousand, grown to nearly five-thousand in the past 4 generations) where a small proportion of their births have been "cursed", becoming members of their race smaller and less powerful then the norm (though still quite strong and large when compared to men). These "cursed" are looked on with pity by the larger members and they have largely self-exiled themselves to the northern-most part of the bowl. With the proportion of "cursed" to "normal" births increasing as the centuries pass, the clan has started to become concerned for the purity of their race and look increasingly for a way out of their trap. At present, cursed population is 430.

Outsiders that enter the sanctuary operate under it's time constraints: upon leaving they are aged 1 year for every 3 days spent within (and that is how much time passes outside.) 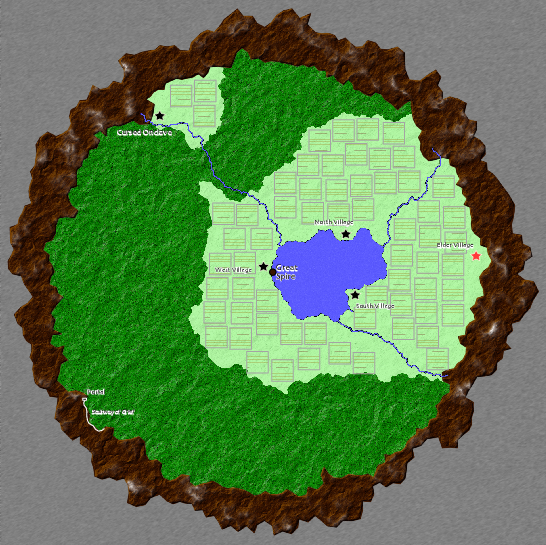 Hunfrithi weapons tend toward axes and hammers, with spears for ranged weapons. All weapons are DOUBLE normal size and weight, with 50% better FV (weapons for the "cursed" are 50% heavier with 25% better FV). Armor is usually chainmail or platemail and is 50% heavier with +1 AV and +25% DR. "Cursed" armor is usually Brigandine. Helms are metal or full (as fits the armor used).

The remaining clan is lead by an elder of the refuge times. Bruhufo Yngwyth is over 400 years old and was a youth when he entered the sanctuary with his family. He is doted over by the residents of the sanctuary as an almost holy figure.

The defense of the sanctuary is lead by Tyril Hworgam, a true monster among his brothers.

As head weaponthane of the sanctuary, Tyril leads the defense militia (a group 800 strong) on mock battles and training. Militia units have +4 OCV and +4 DCV and an average weapon skill of 5.

One of the female cursed, Elia Thergok, is abnormally short, even for a cursed member and only reaches a "mere" 6' 4". She is desperate to leave the confines of the bowl and would jump at any opportunity to escape.

Use Dwarven Con and App maximums.

Poison bonuses are as for dwarves.